Back to the Main Page 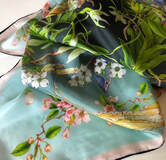 Wildflower painter, Heeyoung Kim, documents native plants of Midwestern prairies and woods. Rare and endangered ones are in her priority as plant population is rapidly decreasing globally. She creates detailed portrayals of each plant and its life cycle through keen observation and broad research throughout its growing seasons in natural habitats. Her paintings and drawings are distinguished with scientific accuracy, authentic composition, and masterful rendering of the medium. She has been building up a digital image bank from her artworks in her blog "Project 200". She set a goal to paint 200 native species and hope her art would be used for educating the public about native plants and nature conservation.

These accolades lead her to invitation by the Prince's School of Traditional Art to participate in Transylvania Florilegium, the wildflower documentation project in Transylvania, Romania in 2013. Three of her watercolors have been selected for inclusion.
​
After her first solo exhibition at Brushwood Center at Ryerson Woods in 2011, she quickly gained a reputation as a wildflower painter. Her story was featured in WTTW, Chicago Tonight as ''Rare Plant Painter", in June, 2015, and numerous local media.
​
She founded botanical art program at Brushwood Center and teaches this traditional art form in various media. Also she often collaborates with schools, gardens, and garden clubs to advocate the important role of plants to eco sustainability and our own existence.